The top 8 events happening in Hull this week 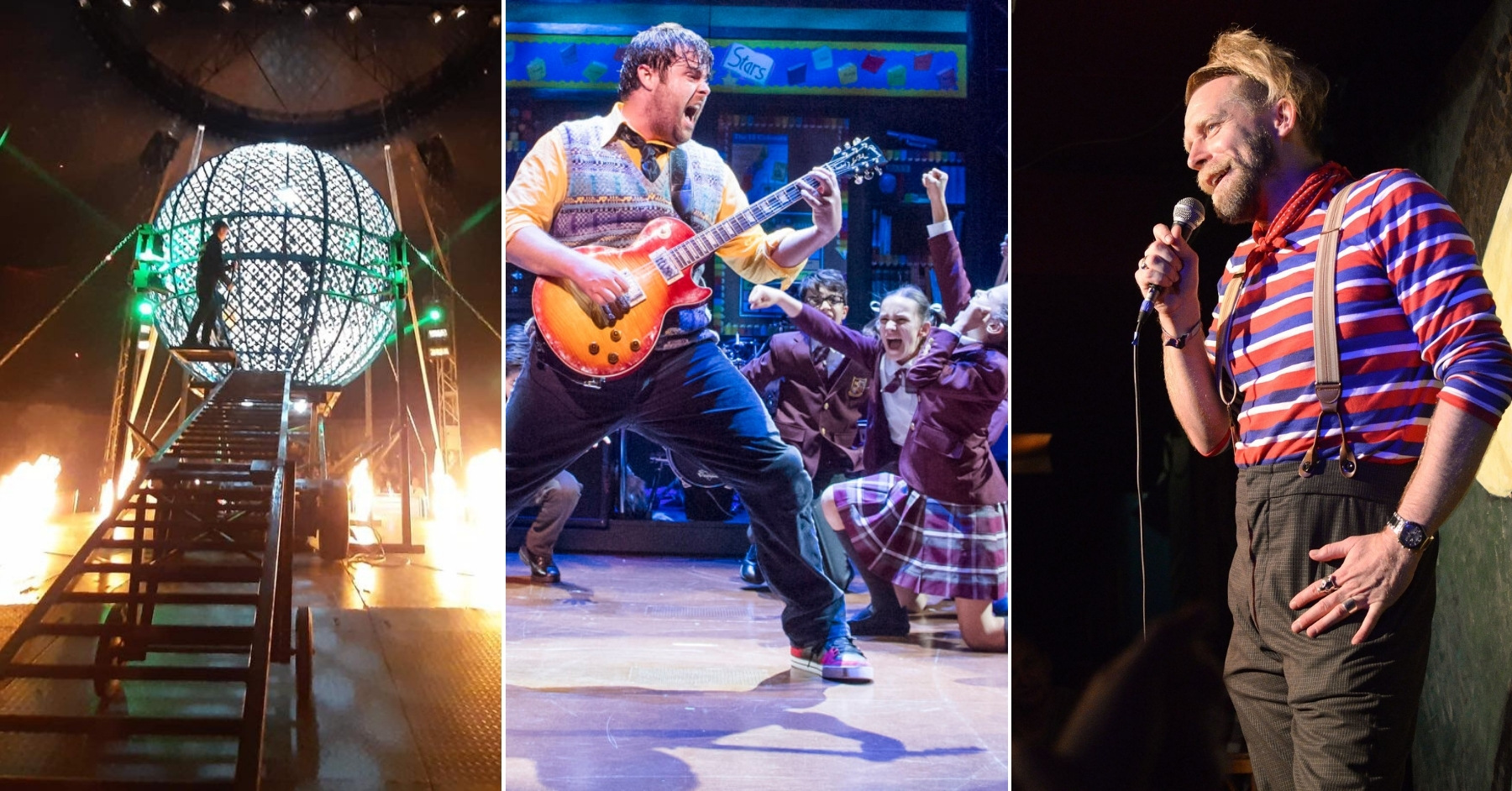 Another amazing week of events is upon us here in Hull and this one is jam-packed full of live music, stand-up comedy, and theatre. Legendary guitarist Albert Lee, Of Allies, and Keep the Faith are taking to the stage this week, all offering different flavours of live music in Hull. If some stand-up comedy is what you’re feeling, then look no further than the Cottingham Comedy Club, Tony Law, and Tez Ilyas. And if that’s not enough then we’ve got Planet Circus rolling into town, as well as the opening of Andrew Lloyd Webber’s School of Rock The Musical at Hull New Theatre.

“Well we teased big news and we’re not the sort to go all fancy with big fireworks. It’s not on our budget and Jed isn’t allowed near them. We are back at the newly refurbished Back Room in Cottingham, relaunching September 9th with the fantastic headliner Tom Wrigglesworth.

“Tom is an established stand-up comedian, radio and TV presenter and voice-over artist from Sheffield, England. With a disarmingly charming delivery and unforgettable appearance, this Yorkshire funny man became a national have-a-go-hero when he rescued a little old lady from the jaws of a Virgin train ticket inspector; only to be arrested for begging. His subsequent story of the event secured Tom several awards including the Chortle Best Show Award, and a nomination for the main Edinburgh Comedy Award.”

This night of comedy is set to be a fun filled and packed to the rafters with laughs. Tom Wrigglesworth is headlining along with Jed Salisbury and Rich Austin as support. If you’re interested in this event, there’s more information and tickets here.

“Undoubtedly one of the finest guitarists the world has ever seen, Double Grammy Award Winner Albert Lee is also an accomplished piano player and has a fine singing voice. He has a soulful voice but can equally ‘tear it up’ rock ‘n roll style. Co-writer of Country Boy and writer of many other great songs, always in great demand by other artistes, he has played on countless sessions worldwide.

Legendary british guitarist Albert Lee is set to play in Cottingham on Thursday at what is to be an amazing show filled with lots of memorable songs from his long career. More information and tickets are available here!

“‘Destined for comedy stardom’ (Time Out) ‘Form-busting and hugely enjoyable’ (The Times) ‘Clever and blithely zany’ (The Daily Telegraph) ‘To see Tony Law is to inhale deep breaths of comedy oxygen’ (The Herald) ‘An ever-changing, hard-to-contain, force of nature’ (The Guardian) ‘A fine celebration of the absurd, full of laughs like no other… a top-notch comic who marries a powerful delivery with some deceptively ingenious material’ (Chortle). Tony Law was named in Ents24’s top 20 hardest-working comedians of 2016.”

Packed with laughs and amazing, this Tony Law comedy gig will be a night you don’t want to miss, tickets and more information are available here.

“A mischievous and engaging comic, he tackles a variety of topics with an intelligent mind and a flair for deconstructing modern society while subverting audience’s expectations. His playful style and cheeky personality, along with a wry wit led him to win the coveted London Comedy Store’s King Gong on his first attempt, as well as reaching the finals of the BBC New Comedy Awards.

“Star of BBC Radio 4’s TEZ Talks, BBC Two’s ‘Live from the BBC’ and BBC Three’s ‘Man Like Mobeen’. ‘Sartorially stylish and winningly cheeky’ (Chortle) “Blackburn-born Ilyas has a slickness more reminiscent of US comics, and the gags to back it up, though his most prized asset could yet be his bold, subversive streak” (The Guardian). Tez Ilyas featured in Ents24’s 20 Hardest Working Comedians of 2018 list.”

Another great night of Comedy from Tez Ilyas that’s set to be full of laughs and stylish, up to date, satire. More information and tickets are available here!

“Of Allies are BACK! After 18 months of constant set backs, Of Allies are back LIVE at KINGS in Hull for a special one off show to celebrate the latest release of EPOCH.

“Having just reached the milestone of 7.5 million streams on Spotify after the release of their sophomore album ‘Are We Better Off?’ at the end of 2019, the news follows the DIY band’s highly impressive string of successful releases, bringing back songs that morphed and shaped the band into what they are today with the album ‘EPOCH’ comprising of the ‘Tempers’ EP and ‘Fragments’ EP, set to release on 10th September 2021.”

Local legends, Of Allies, are set to play a hometown show celebrating the release of their latest album “Epoch”. More information and tickets are available here!

“Keep The Faith are firm favourites on today’s Motown, Northern Soul and Soul scenes with many appearances at UK and European festivals and events.

“With a line-up of guitar, bass, drums and keyboards, female lead and backing vocals and a one, two or three-piece brass section, the band play authentic arrangements of the original songs which originated from the mid 60s and have swept the dance floors ever since.”

Keep The Faith are an amazing band that will be sure to impress everyone with faithful recreations of classic soul songs from the 60’s, more information and tickets are available here!

“With everything that you would expect from a traditional circus but with a modern twist and spectacular thrilling stunt action!

“The legendary PLANET CIRCUS is an amazing adrenalin packed family spectacular that will thrill audiences of all ages.”

If you’re a fan of amazing stunts and theatrics then you wont want to miss this amazing Circus Planet event. More information and tickets are available here!

“School of Rock is the global hit musical based on the iconic movie starring Jack Black. Wannabe rock star Dewey Finn is cast out by his dive-bar bandmates and finds himself in desperate need of cash. Posing as a substitute music teacher at an elite prep school, he exposes his students to the rock gods he idolises, transforming them into a mind-blowing rock band.

“While teaching these pint-sized prodigies what it means to truly rock out, Dewey falls for the school’s beautiful, but uptight headmistress, Miss Mullins, helping her rediscover the wild child within. But, will they all find redemption at the battle of the bands?”

School of Rock is sticking it to the man this week at Hull New Theatre. Don’t miss this amazing show featuring all of the original songs from the movie. More information here.